By the time Good Vibe goes on, seats continue to fill as the energy of their sound reverberates throughout the fair. As both sets conclude, the crowd starts to disperse with a buzz. “Wow, those young bands are amazing!” “What was the name of that band?” “How old are they?” “Such talent.”

“The shows are a total scene—a who’s who of wonderful, old-school locals and the edgy younger generation connecting through music.”

The chairs soon are empty, and the crowd assimilates back into the fair. From the audience’s reaction, this revival of old-school rock ‘n’ roll is refreshing and captivating to many—especially adults.

But that audience will likely never hear either band again. Between that September afternoon and today, XYZPDQ and Good Vibe split and reformed new acts. Kate Anderson, a judge at Manhattan Beach’s Stomping Grounds teen music showcase, says it’s not unusual for young bands to break up and realign while they find their voice.

“Success is a dynamic concept in the music business,” she says. “I think growth—both individually and for the music as a whole—always comes with hard decisions and craftsmanship choices.”

Talented young musicians are proliferating in rapid numbers in the South Bay. The craft is honed in rock schools, rock camps, private lessons and even YouTube tutorials. Despite their young ages, Kate believes there is a professional level of talent amongst many of these local teen bands.

“Surprisingly, it is pretty common that young bands of their caliber exist,” she says. “The magic of YouTube tutorials and Skype lesson capabilities have afforded a younger generation an edge that constantly amazes.”

XYZ’s Julian Bailey and Dax Corcoran quickly regrouped and formed Live Wire (after the Van Halen song) and have taken their music to a different place, with even heavier rock tunes and covers from The Who, Van Halen and Tool. “When I’m finished playing a show, it feels like I’ve returned from an epic space expedition,” shares Dax.

Both musicians love to interact with each other—a call and response between the guitar and bass—while the vocalist takes more liberties with improvising rather than parroting the exact song.

XYZ’s other bandmates, Nicolette Obuljen and Salem Darling, have been spending their time on original music in the recording studio with new band SpitFire Grit. “As a teen I feel I am silenced every day in society,” says Nicolette. “When I get on stage, I can finally let go of the silence that consumes me on a daily basis. I am free and untouchable.”

SpitFire Grit’s video of the original song “Unstoppable Explosion” received almost 1,000 views in the first few days of its release. Music videos are not cheap either; just one day of production can cost up to $15,000. Before Good Vibe, bassist Slater Heidrich and singer/keyboardist Brooke Blake played in the band 2021 for a few years. Brooke recently merged with a teen punk band from Torrance, and they are now called Missed90s. Slater started an entirely new band called FIKA with lead vocalist Olivia van Doornewaard and Dax on drums.

“Whenever I play on stage, it is a feeling that can’t really be described,” shares Slater. “Once you start playing, you lose all control. It’s kind of like nirvana. You are not thinking. Your body just moves how the songs want you to move, even if it might look weird.”

“Seeing that they faced those hard choices at a young age and have moved on to make more music is a mark of success in my eyes,” adds judge Kate.

And getting started in high school can lead to bigger things post-gradation. Alinea, a Palos Verdes alternative and indie rock band whose members are now in college, released an original song, “She Doesn’t Get It.” It hit #1 on KROQ’s Locals Only chart for four straight weeks and has almost reached 1 million streams worldwide.

All the Beach Cities offer opportunities for young bands to play for the public. This year teen bands will open for two of the main bands during the summer concert series at Polliwog Park. Last year, Good Vibe opened for Queen Nation to a crowd of approximately 15,000 people.

Hermosa Beach is known for having teen bands play at their annual tree lighting and Spyder Surf Fest. The Redondo Beach Police Department has done their part supporting bands at a myriad of events throughout the year.

Above  |  Dax Corcoran of FIKA and Live Wire

Beth Rohde, owner of Coast Music in Hermosa Beach, believes the teen music scene has evolved dramatically in the last decade. “When our son Max was young, there was only one kid band that we knew of, and it was his band Crime Scene,” she says. “Since then it has been a slow and steady evolution. We now have 12 bands at Coast Music alone. Kids learn how to work together and hone their skills. Friends and family of band members come to performances and see how fun it is and see all the benefits, and they want to be in a band too.”

Access to expensive equipment and a parent’s willingness to schlep kids to rehearsals and gigs is also a contributing factor. With amplifiers bigger than they are and guitars like Fender, Les Paul and PRS in the mix, there’s cost associated with playing in a band. Parental involvement is a huge bonus for these kids … and something that didn’t always exist at the same level in earlier generations.

Local venues play a key role. One of the first venues to jump on board to showcase teen bands was The Lighthouse Café and Saint Rocke in Hermosa Beach. “I saw the pier was always busy on Saturday afternoons with families and thought how cool it would be for the younger musicians to play on this iconic stage,” explains The Lighthouse’s Steven Grehl. “I also knew this meant their families and friends would also gravitate here, and of course they most likely would be future patrons when they come of age.”

“Good Vibe was totally all in at their show at The Lighthouse Cafe,” says local musician Kevin Sousa. “The rhythm section shined and was locked into a groove, laying the bed for excellent guitars and melodic vocals. The shows are a total scene—a who’s who of wonderful, old-school locals and the edgy younger generation connecting through music.” 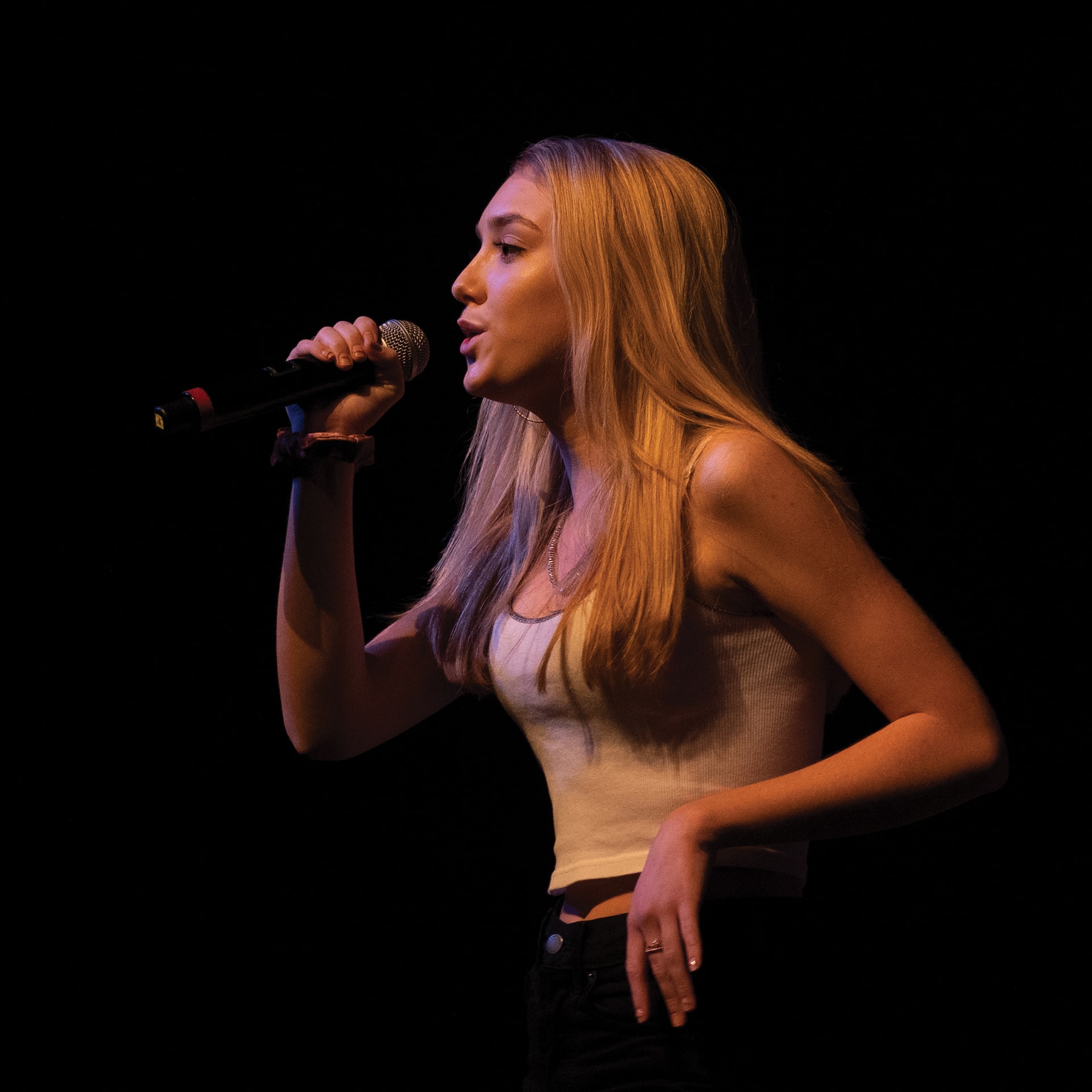 Other venues have since jumped on board, including The Standing Room, Watermans, OBs, Patrick Malloys, Tower 12, The Slip and Hey 19. “I think the South Bay supports our teen music scene in a big way,” explains Joie Shettler, an original member of The Pussycat Dolls and lead singer of The Radio Rebels. “The support of many live venues here is a big bonus. The experience of playing live is essential in the growth and confidence of performers.”

Marketing is a huge part of a band’s platform, and all of these young bands are getting powerful experience learning the power of social media marketing—whether through Instagram, Facebook, Snapchat or TikTok. “Bands are driving the new-school economics of social media’s critical influence in generating a following and getting kids off a device and out to a live show,” says Britta Wichers, formerly the production manager for Aerosmith and mother of Live Wire’s Dax.

Salem has more than 12,000 followers on YouTube. Guns N’ Roses was so impressed with her 10-year-old guitar playing skills, they posted her YouTube video, which then received an astounding 6.5 million views.

Manhattan Beach City Council member Steve Napolitano counts himself a fan of this youth music movement. “Hopefully more venues will open up to them,” he says. “Who knows, maybe we can all say ‘we saw them first’ when one of the bands hits the big time and comes back to play when they’re famous.”

THEY’RE WITH THE BAND

John Barry (20), lead vocals/guitar; Shannon Ennis (20), bass/vocals; Lance Meliota (19), drums/vocals; Ben Tyrrell (20), lead guitar/vocals. Alinea is about to sign with a manager/production group that will allow them to remarket their band while maintaining independence and control over their music.

Kobe Miyake (17), vocals; Teddy Stavropoulos (17), bass/guitar; Sam Nicosia (18), bass/guitar; Braden Woomer (16), drums. They were formed after Kobe and Sam met at Grammy Camp, held at the infamous Grammy Museum in Los Angeles. The DropOffs have been in the recording studio and released original songs “Earthquake Blues” and “Hitchhikers Tune.”

Jack Whitney (17), vocals/keys; Sam Rohde (16), bass; Zak Anderson (17), guitar; Sophia Papouchado (15), drums. Jack and Sam have been in the band since they were 8. The other members and band names have changed multiple times; previous band names were Altoid Addicts, Max Volume and Last Five Minutes. They are working on originals but also perform covers including Bruno Mars, Rush and Muse. Originals just released are “The Words You Say” and “She’s the One.”