A place in the sun.

A.J. Cook grew up the third of four children in Oshawa, Canada, a “blue-collar hockey town” where acting wasn’t high on the list of career options. She describes her younger self as incredibly shy—a quality she still acknowledges in herself today. “You might be surprised how many actors are shy off-camera,” she shares.

To help A.J. cope with the social paralysis, her mom thoughtfully put her daughter into dance at age 4. “That really helped shape the person I am today,” she adds. “Dancing brought me out of my shell. I needed that expressive outlet of movement and stepping into someone else’s shoes. I was able to express how I was feeling inside through dance.”

A.J. studied various styles including ballet, jazz and tap. She was in the studio every day immediately after school until after 10 p.m. That discipline and work ethic remained steady throughout her life.

It was just after high school that A.J. discovered acting. A “studio rat” as a kid, her time was filled with endless hours at practice and dance competitions. As the longevity of a dance career began to weigh on her responsible young mind, she gave acting a shot. “I have always had a very active imagination, maybe in part because of my shyness. It was through acting that my imagination was really able to blossom because it allowed me the security to do the things I was thinking about and ‘be’ what I admired in others but was not brave enough to do as myself. Acting is my therapy.”

A.J. acquired a massive fan base from a career of great roles, including 15 years as Supervisory Special Agent Jennifer “JJ” Jareau on the hit CBS crime drama Criminal Minds, which recently wrapped up its final season. She also appeared in the cult classics The Virgin Suicides, Higher Ground, Ripper, Out Cold and Final Destination 2. A.J. made the bold decision to study film at college in Utah. There, life imitated art and a love story became interwoven with her career path. It was in film class that she met her husband, Nathan Andersen. A.J. laughs recalling how they met.

“It was one of those super cheesy moments where the room stands still, our eyes connected, the air got sucked out of me,” she says. “It was like I saw his soul, and I knew him in that instant. I guess that’s what a soul mate is. I had never felt anything like that before.”

That feeling proved mutual as Nate went home immediately after that class and told his roommate that he had just met the girl he was going to marry. Still teenagers then, they recently celebrated their 19th wedding anniversary.

A.J. had completed just one winter semester at school when she got her first big break, landing a role in Sofia Coppola’s debut movie The Virgin Suicides in 2000. Nate would visit her on set in Toronto where they were filming—the whole experience new and exciting for both of them. Though the learning curve was steep, she feels fortunate to have been thrown into the film industry suddenly.

In fact, A.J. feels that she has been lucky her whole life and guided intuitively throughout. “When you don’t resist life, beautiful things can happen.”

After filming The Virgin Suicides, A.J. was offered another role in the television series Higher Ground, based in Vancouver. Although there was a thriving film industry in Canada, A.J. felt an enormous pressure to move to Los Angeles. The fast pace of Hollywood was daunting to the shy, nature-loving, laid-back Canadian. But Nate fully supported the dream, and they decided to make the move to L.A. together.

They got in the car and drove down the Pacific coast in search of a place to call home. While driving on Catalina Avenue in Redondo Beach, they came across a man hammering a sign for a condo a half-block from the beach, which had just become available. They stopped, chatted with the man and ended up moving in. They haven’t left the South Bay since.

Within a year of moving to Los Angeles, A.J. landed a lead role on Criminal Minds. “I feel like I kept winning the lottery. The cast has become my family, and they have all helped shape me as a human being,” she says. “I was a child when I started that show; I was very young and naive. It

was such a beautiful experience to go to work every day and work side by side with not just the cast but the crew as well. Everyone wanted to be there and cared about their work and about one another. I couldn’t have asked for a better family, and I consider it a true blessing I got to do that for as long as I did.”

Much had happened in A.J.’s life since she began work on the show, including becoming a mother to two beautiful boys, Mekhai, 11, and Phoenix, 4. The writers even adapted the scripts to reflect her real life, with her character JJ having two kids on the show just as A.J. did. In fact, Mekhai played her son Henry on Criminal Minds. A.J. attributes this attention to detail as part of the show’s success.

“The show has a lot of heart and developed our characters to reflect reality,” she says. “The characters weren’t robot-like heroes saving the day. They were flawed, they were suffering and they were each on their own journey. I think the audience really connected with that. It was devastatingly hard to say goodbye.”

A.J. also finds the time to give back in her role as board member of The Innocent Lives Foundation. “We unmask anonymous online child predators to help bring them to justice,” she says of the cause. “Our ‘white hat’ hackers work tirelessly to hunt down these predators. We also offer important information for parents to help ensure their children are safe and protected online.”

A.J. admits that juggling family and motherhood, as well as her charity work and the crazy hours on set, took some time to master. And finding that elusive balance still proves challenging.

“We are all trying to do too much today,” she says. “There is so much flying at us at all times, and I get a bit lost in the idea of the balance. I thought I had to be doing everything perfectly at the same time. What I found is, for me, this is the exact opposite of what balance is. The only way I find I can do it well is to be where my feet are. To be present, accept where I am and give 100% of me in that moment. As soon as I figured that out, it became a lot easier.” 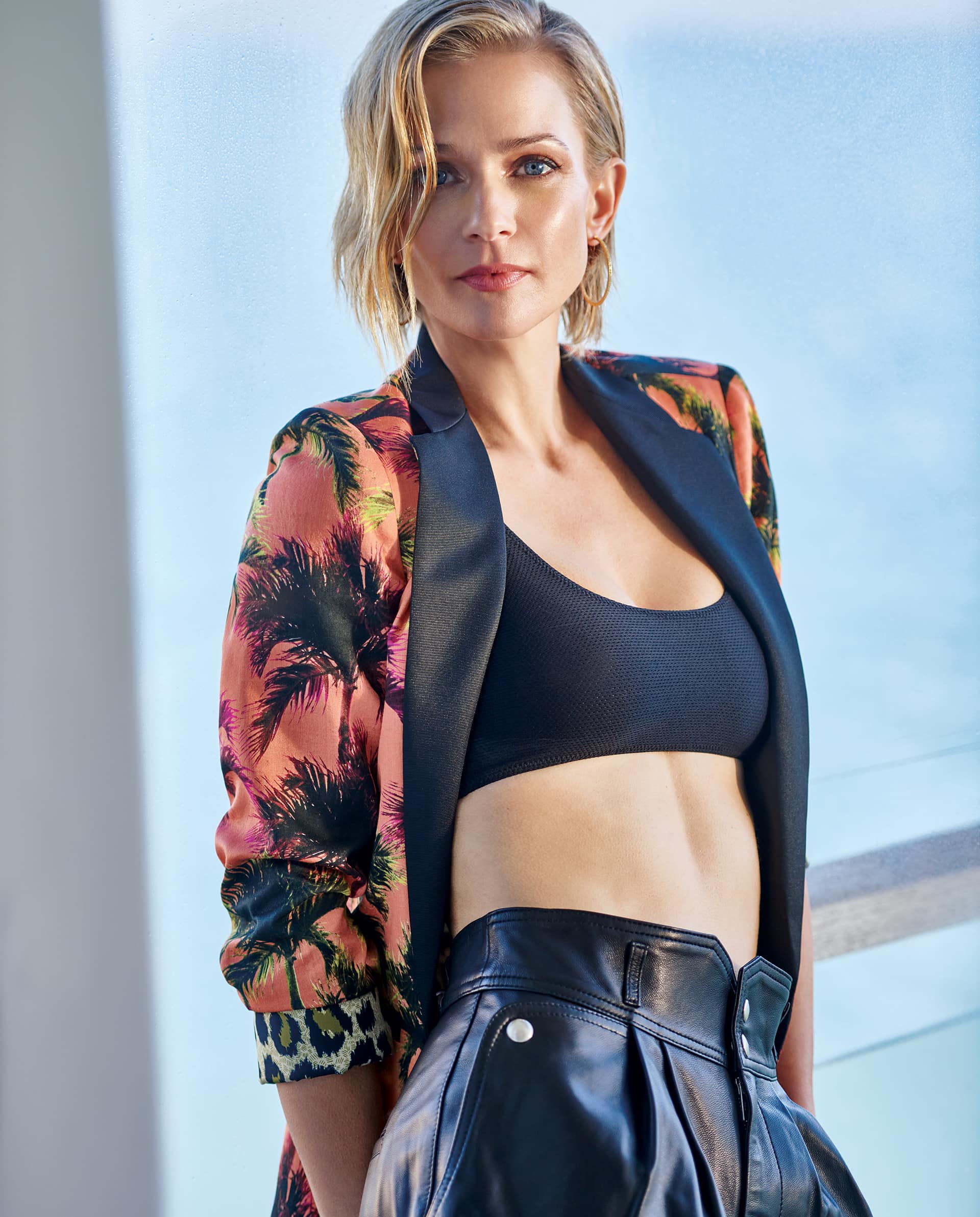 Since Criminal Minds ended, it’s been an interesting transition—one that has also coincided with COVID-19 and quarantine. The whole family has had to adjust but made the most of the uncertainty by spending two months of quarantine in Utah at their second home—a stunning residence on 45 acres of land surrounded by space and sky. Complete with a 40-foot climbing wall built into their living room, this home is a haven … a place to truly get away and disconnect.

But she considers the South Bay her home and always looks forward to coming back. “Living at the beach has been a lifesaver for me and how I function, especially while working and after being around intense energy all day,” she shares. “I love it here. We got very lucky with having great neighbors, and it’s been so wonderful for our boys. These are uncertain times, but it’s been beautiful to see how our community has rallied together. There is a true sense of community in the South Bay that is unique, and that bond will only be fortified as we continue to come together during these unprecedented times.”

This time has allowed A.J. to take a breather and enjoy the South Bay life more fully on a day-to-day basis. “I am slowly trying to create my space here and letting myself just be without having that need to work,” she says. “It’s taken a little time, but I feel like I have finally settled into it.”

The pause has also allowed her to be more supportive of her husband’s successful fashion brand, Walter Sky. “It’s been so rewarding seeing the process from the beginning—to see him design and to see it come to life in front of you, and now see people actually walking around in it. I am so proud of him.”

With discipline and work ethic never far away, A.J. is already moving forward with the next chapter of her life: directing. She was given the opportunity to direct a Criminal Minds episode and fell in love with process. “I love acting and it will always be a huge part of me, but there was just something about directing that felt like home,” she says.

Soon A.J. will direct a feature called Contain, but much to the relief of her many fans, she won’t be retiring from acting just yet. “I want to do it all. I need to create, I need to express myself, and the best way for me to do that is through acting, writing and directing. I’m just so grateful for everything I’ve been given.”