Building a legacy begins with a vision and a call to action. So it was in 1919 when Gardena High School principal John H. Whitely engaged students in his vision of purchasing California plein air paintings as a senior class gift to the school. The class gift tradition continued for the next 37 years through the influenza pandemic, the Great Depression and two world wars. The legacy they left behind tells the story of Southern California art through the eyes of the students who collected it. Above: (left) The Mountain Brook by Paul Lauritz, class of S1925. (right) Rockbound by Edgar Alwin Payne, class of 1921

The program ended in 1956 when the current high school opened with limited exhibition space, and the majority of the 72 art pieces went into storage. The story might have ended there and the legacy might have been forgotten, if it weren’t for a group of dedicated alumni and supporters who took action to save the Gardena High School Art Collection and bring it back to light.

The story of the Gardena High School Art Collection begins in the early 20th century. Founded in 1904, the school was the third high school built in Los Angeles County. When Whitely was appointed principal of Gardena Agricultural High School in 1918, Gardena was an ethnically diverse and sparsely populated farming community. The following year the school was renamed Gardena High School, and Whitely instituted an arts-enriched curriculum incorporating a hands-on approach to education inspired by the landscape.

Whitely’s progressive beliefs mirrored ideals of the Arts and Crafts Movement embraced by early plein air artists of the Arroyo Seco region. So it was no surprise that the graduating class would be encouraged to visit artist studios and select plein air landscapes by painters in the area.

“The principal saw something that was happening in the Arroyo with these plein air artists, and he thought it was important and it needed to be documented,” observes art historian Susan M. Anderson, author of the publication GIFTED: Collecting the Art of California at Gardena High School, 1919-1956.

With the 1919 class gift of Valley of the Santa Clara by Ralph Davison Miller, the tradition began. The 1920 class followed with the gift of Jean Mannheim’s On the Road to San Gabriel, the first of four paintings purchased from the artist. Rockbound, a unique seascape by Edgar Alwin Payne, noted for his Western scenes, was gifted by the class of 1921. The class of 1922 returned to plein air landscape with their selection of Morning at Montrose by Hanson Duvall Puthuff.

Beginning in 1923, when the student body grew to include winter and summer graduating classes, the school became the beneficiary of two gifts per year. With a larger student body came increased fundraising opportunities, enabling the class of summer 1924 to purchase two paintings, including the collection’s first figural work, The Brass Bowl by John Hubbard Rich—the figure reflecting Gardena’s large Hispanic population.

Pride in the collection was evident when the new 1923 high school building included an auditorium designed to house the paintings. It became known as the Gardena High School Art Gallery. The classes of summer 1925 and winter 1926 commissioned two monumental paintings to flank the stage: The Mountain Brook by Paul Lauritz and Elmer Wachtel’s The Santa Barbara Coast.

In 1928, at the suggestion of painter Hanson Puthuff, Principal Whitely expanded his vision for the program by launching the annual Gardena High School Purchase Prize Exhibit. The school invited artists and galleries to the exhibition, which became an annual event—as did the banquet dinner that kicked off the exhibit. Artist John Frost was the first recipient of the prize. His painting, Desert Twilight, was purchased for $300.

Ticket sales from the banquet, along with class plays and teas, became the primary funding source for class gifts. During the three-week exhibition period, seniors were required to attend a class called Senior Problems—structured to give them the art appreciation skills necessary to make an informed decision when it came time to vote.

Over the years the Purchase Prize Exhibit grew to become a coveted showcase for artists competing for the honor of having their work added to the collection. Some artists reduced their prices to make these purchases possible, while others gifted their artwork. Other gifts to the collection included paintings produced under the Public Works of Art Project, a federal program created to employ artists during the Great Depression.

In addition to the artists, hundreds of teachers, parents and community groups worked with the senior classes to organize and support these events, making them important catalysts for engaging the entire Gardena community while connecting the school and its students to the larger Southern California art world. All this, Susan suggests, gives the collection “an educational value beyond the financial considerations.”

For the now-alumni who lived with it daily, the value of the Gardena High School Art Collection is beyond measure—engendering a lasting commitment to its preservation. For Janet Perdew Halstead-Sinclair, class of summer 1950, this has translated to decades of service to the art.

Janet started at the six-year school as a seventh grader in 1944. By then, one-third of the student body was absent following the Japanese community’s relocation to internment camps. Wartime life fostered perseverance through adversity, no doubt informing the students’ selection of art.

Class of summer 1943 gifted the Japanese-inspired Cranes Under a Giant Fern by Jessie Arms Botke. Class of summer 1944 chose Maynard Dixon’s 1932, Men of the Red Earth, an iconic depiction of the enduring Native American spirit.

Janet vividly recalls, “I entered Gardena, and the first time I went into the auditorium I was stunned! Absolutely stunned! There were these gorgeous paintings. I had never seen anything like it. Then I went into the library and there they were, on all four walls, above the books. That was my introduction to art.”

Since graduation, Janet has worked tirelessly to preserve the Gardena High School Art Collection and assure that the class gifts remain in the hands of the Gardena High School student body. When she and a group of fellow alumnae became concerned about the deterioration of the artwork in the 1990s, they copied a 1952 book about the collection and sold it to alumni. The women were responsible for some of the first conservation efforts—cleaning and restoring 19 paintings with proceeds from book sales. Valley of the Santa Clara by Ralph Davison Miller, first gift class of 1919

“When you realize that these big, beautiful pieces of art are just drawing dust, you have to do something—you absolutely have to!” Janet asserts.

Following these early restoration efforts, the collection remained largely unseen until the president of CSU, Dominguez Hills decided to show it at the University Art Gallery. The 1999 exhibition, Painted Light, brought the collection back into the public eye.

Thanks to a $300,000 grant from the W. M. Keck Foundation, the university was able to conserve and exhibit 31 California Impressionist paintings, as well as publish a catalog written by Stern. The exhibit traveled to The Irvine Museum and was well attended in both locations, introducing the collection to a whole new generation.

The Gardena High School Art Collection is well known among art collectors, dealers and art historians for its quality. But for Stern, the degree of student involvement in the acquisition of the paintings is what truly sets it apart. “The fact that they were chosen by high school students, that they were contemplated, they were researched, they were discussed with the artists—that’s really remarkable,” he says. All these early efforts by alumni and supporters laid the foundation for the formation of GHS Art Collection, Inc. (GHSAC), a nonprofit organization established in 2010 to protect and preserve the collection. Following the success of Painted Light, the group continued to raise funds for the conservation and restoration of the paintings, but they lacked expertise in collections management. They needed guidance. Enter Simon Chiu.

A collector of California art, Simon’s journey with the Gardena High School Art Collection began in 2005. When the Pasadena Museum of California Art (PMCA) mounted a retrospective on artist Alson Skinner Clark, they borrowed one of Simon’s paintings for exhibition alongside class of winter 1938’s After the Shower, Cuernavaca. It was kismet.

By the time Simon was introduced to the GHSAC board in 2012, he had already honed his skills in exhibition planning, publication and nonprofit fundraising as a trustee of the PMCA. He met with the group trying to make improvements to the storage space at the high school. “They had a good heart,” says Simon. “They wanted to preserve the legacy of the collection, but they were doing it all wrong.”

Simon convinced them that the collection needed to be removed from the closet, cleaned by a conservator and professionally photographed. In addition, an art historian had to be hired to research and write the story so they could publish a book. When he told them the total cost would be $250,000, he recalls, “Everyone just laughed.”

Simon joined the board and used his relationships with art professionals to get much of the work done pro bono, and raised funds from private collectors, friends and museum associates. In 2015, Simon engaged Susan to write the publication and curate an exhibition in conjunction with its 100th anniversary.

In 2019, GIFTED: Collecting the Art of California at Gardena High School, 1919-1956 premiered at the Hilbert Museum of California Art at Chapman University and has since traveled to other Southern California institutions. Bruce Dalrymple, class of summer 1961 and president of the GHSAC board, says of Simon, “It’s amazing what he’s done. We’re indebted to him.” 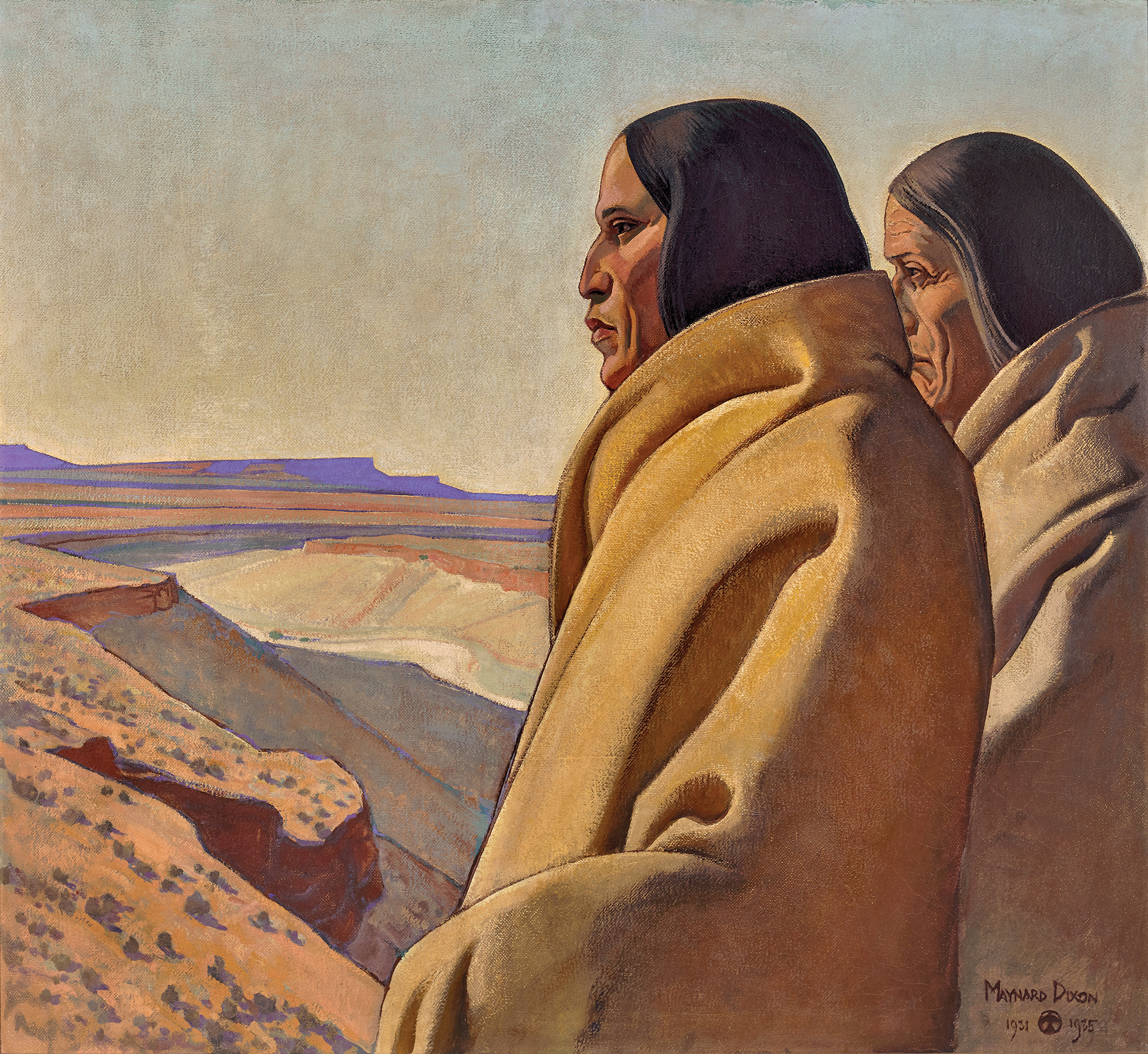 Men of the Red Earth by Maynard Dixon, class of S1944

Palos Verdes Art Center is the latest venue for GIFTED. On view through November 12 are 50 of the 72 paintings from the collection, including the newly restored class of summer 1930’s Beethoven by Carlo Wostry.

CEO/executive director Daniela Saxa-Kaneko, who selected the exhibit, says, “This is an important show for Palos Verdes Art Center in terms of building community and reaching a broader audience.” She hopes the exhibition will be the catalyst for a lasting relationship between the neighboring communities—closely connected geographically and through a shared history of engaging the public through art.

Gardena High School principal Frank Davies, who serves on the GHSAC board, is committed to bringing awareness of the collection to his students. While the board has provided copies of GIFTED to the school and installed giclée prints of the collection in the library, he has arranged for them to come face-to-face with their legacy at PVAC. “It’s one thing to take it from a book and another thing to see prints in the library,” he explains. “The key is to actually go there and have that learning experience.”

What is the future of the Gardena High School Art Collection? The GHSAC board hopes to see the collection housed in a permanent location with space to exhibit it and funding for its care. Where is still undecided. In the meantime, making the collection accessible to the public is priority #1.

Susan agrees: “It’s institutions like Palos Verdes Art Center that are taking the collection and showing it and making it available to people who will keep it alive and help keep it together. There are points it almost went away because it wasn’t in the public view. It needs to stay in the public view.”  GIFTED: Collecting the Art of California at Gardena High School, 1919-1956 is now on view at Palos Verdes Art Center through November 12. For tours and info visit pvartcenter.org.